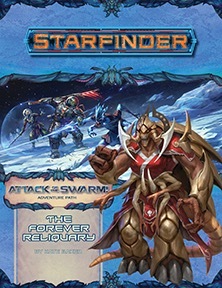 Comet And Get It The heroes must hunt for an icy comet hurtling through the void, the supposed home of a secret monastery dedicated to the insect goddess Hylax. Once there, they'll have to gain the trust of the inhabitants by undertaking a series of trials. If they succeed, they will be granted access to a powerful artifact that will aid in the battle against the ravenous, nigh-unstoppable Swarm. But before the monks can entrust the item to the PCs, the comet is besieged by waves of Swarm creatures eager to get the artifact for themselves! This volume of Starfinder Adventure Path continues the Attack of the Swarm! Adventure Path and includes: “The Forever Reliquary,” a Starfinder adventure for 7th-level characters, by Kate Baker. A look at the Church of Hylax and its worshippers from the Pact Worlds and beyond, as well as a new mystic connection for those devoted to the Forever Queen, by Eleanor Ferron. An exploration of several monasteries found across the galaxy, by Anthony Bono. An archive of alien creatures, including a demonic saboteur and a pair of new and deadly Swarm creatures, by Kate Baker, Anthony Bono, Kevin Bryan, and Nate Wright. Statistics and deck plans for a cramped military destroyer, by Anthony Bono, plus a glimpse at a frozen world at the edge of a solar system, by Kevin Bryan.