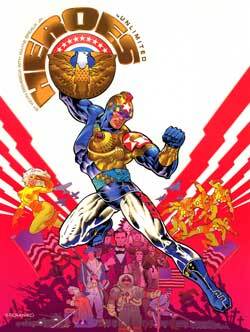 Heroes Unlimited™ RPG The Heroes Unlimited™ RPG has been a hit RPG for 30+ years because it enables you to create any type of comic book hero you can imagine. Make characters pulled right from any comic book you like or design your own league of extraordinary heroes. Some heroes may be superhumans gifted with incredible super abilities, or immortal or practically living gods. Others may rely upon their mastery of the martial arts or weapons training and intelligence. Some may be alien super beings from another world or mutant humans, or mutant animals, or a living plant creature. Still others may rely upon their wits and their super-vehicle, power armor, bionics or robot body! Others are gadgeteers or tricksters, while some wield psychic mind powers or command the forces of magic. It’s called Heroes Unlimited™ for a reason. If you seek comic book heroic adventure, Heroes Unlimited™ does the job on an epic scale. Plus a dozen sourcebooks provides you with more super abilities, hero categories, bad guys and adventures. Create any type of hero you can imagine. 101 super abilities plus a multitude of sub-powers within them, bonuses and special combat capabilities. 100+ magic spells plus enchanted weapons and objects. 72 psychic powers. Enchanted weapons that instill super abilities. Mega-Heroes and immortals. Alien super beings. Bionics and cyborgs. Robots and power armor. Masters of magic, wizards and spell casters. Mutants and Super Soldiers possessing super abilities. Psionics and Psychics. Inventors, super-geniuses and super-vehicles. Special Training: Martial arts, weapons, more. Cover by comic book legend, Jim Steranko. Art by Ramon K. Perez, Paulo Parente, Gustovich, and others. Written by Kevin Siembieda. 352 pages for a complete RPG – Cat. No. 503. I.S.B.N. 1-57457-006-4