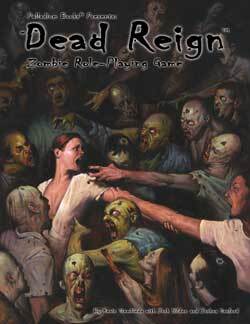 Dead Reign® RPG - Core Rules - everything you need to know to play Experience the nightmare of being stalked by the living dead. Who can you trust? Where can you go to be safe? How do you fight the dead? Find out in Dead Reign® - a complete role-playing game that captures the horror, suspense and trauma of the post-apocalyptic world dominated by zombie hordes. And the zombies? More than what you may expect. All of them deadly. Rules are easy to learn. Combat is fast, fun and intuitive. The setting, brutal and unrelenting. Characters represent the last of humanity. Play ordinary people who must find a way to survive against impossible odds; 40 different occupations and notable skills for each. Or play one of the more extraordinary survivors who battle zombies and try to rescue the living. They don't mean to be heroes, they just are. They say there is no surviving a zombie bite. The Half-Living say otherwise. They are victims of a zombie attack, but instead of dying and turning, they come out of their coma more (or some would say, less) than human. The question is, might they turn at any time? Slouchers are the slow moving zombies. They gather in large herds and kill all they encounter. Flesh-Eating Zombies are fast and predatory. They hunt in packs, and stalk humans day and night. Mock Zombies are twisted abominations: The dead who retain a large portion of their mind and identity, but cannot accept what they have become. Most are quite insane and insist they are not monsters. They claim to be alive, and only want to help their "fellow man." That last part might even be true, until the irresistible need to kill the living takes over. Pattern Zombies are the dead that only kill when they come face to face with the living or are attacked first. Unlike the Slouchers and other zombies, they don't seek out human prey. Rather, they are locked in some pattern from their past life, endlessly reenacting their job at the factory, or a typical day at home mowing the lawn or watching the game on a TV that no longer receives broadcasts. Thinkers are among the most dangerous: zombies that retain a level of cognitive thought and awareness. They can open a door or unlatch a gate, use a weapon such as a knife or axe, figure out ways to get inside strongholds and go around traps. Worst of all, other zombies follow them, and Thinkers often lead mobs of lesser zombies against the living. More than 30 pages describing zombies, with all the hows and whys of their behavior and their need to kill the living. Seven different types of zombies (more appear in the Dark Places and Endless Dead sourcebooks). Page after page of Zombie Apocalypse survival tips. Six Apocalyptic Character Classes, with any number of Ordinary People as survivors fighting to keep humanity alive. Death Cults and their leaders. Not all humans are allies. Retro-Savages, survivors who blame the apocalypse on technology, and feed people who still use guns, cars and tech, to the dead. Weapons, survival tips and how to fight the dead! Vehicles, equipment and notable resources. 101 Random Scenarios/Encounters/Settings, adventure ideas and more. The complete core rule book. And learn the rules of this RPG and you can play any Palladium RPG. You see, Palladium's games all use the same basic rules. Learn one, and you can play them all. More than that, you can bring your characters, weapons, powers and magic from one game setting to the next, creating a truly infinite Megaverse® of worlds and adventure. Cover by E.M. Gist. Art by Amy Ashbaugh, Nick Bradshaw, Mark Dudley and Mike Mumah. Written by Kevin Siembieda, Josh Hilden and Joshua Sanford. 224 page core rule book - Cat. No. 230. Available now from Palladium Books® and in game shops everywhere.