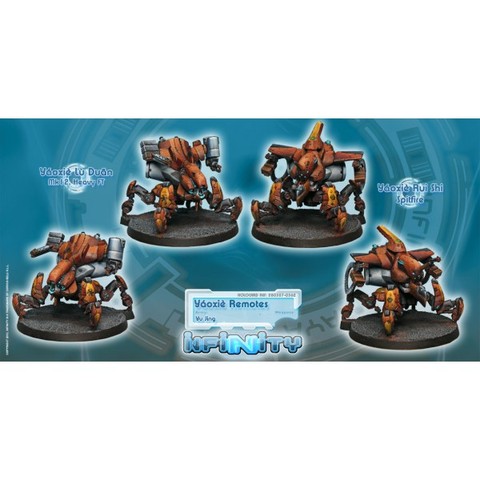 The new attack Remote doctrine of Yu Jing’s StateEmpire Army was formally established in Campaign Manual 27-5 “Yáoxiè Units. Tactical Use.” The manual collected the experience acquired during the NeoColonial Wars and developed an offensively-focused military doctrine: “There is only one objective for attack remote units […] the destruction of hostile elements.” The entire text constantly emphasizes the need to make aggressive and vigorous tactical deployments: “The meaning of the name Yáoxiè (Remote Weapon) must not be forgotten […] and a good officer should use them in this way. […] The Yáoxiè must be conceived as active combat units, above and beyond establishing defensive positions.” A special emphasis is placed on their speed and ability to tactically overcome enemy forces. This manual influenced the design of the different Yáoxiè models, giving priority to speed over armor. This conception makes them more than adequate for low intensity conflicts and urban combat. However, the Yáoxiè can also carry out different and varied conventional military tasks, such as taking terrain, striking at an enemy’s command and control structure, providing infantry support, locating and destroying hidden threats, or repelling enemy counter-attacks. In counter-insurgency operations, carried out with Imperial forces, its roles are considerably broader, including tasks such as protecting convoys and resources as well as other internal security jobs. The technology included in the Yáoxiè gives them a superior target acquisition capacity over ordinary troops. Their advanced optical systems and Multispectral vision devices allow them to detect enemy activity through extreme environmental conditions, such as smoke or darkness, which would usually limit the better-equipped infantry. As threat hunter-killers, they are the Yu Jing soldiers’ protectors, receiving appropriate code names. Rui Shi are the two lions that guard the entrances to Chinese temples and palaces, while the Lù Duān were beasts that could detect truth and guarded the emperor’s throne. However, they are not passive protectors: either Yáoxiè model can lay down a concentrated curtain of firepower, as certain as it is lethal, over a designated target, which is exactly how the Yu Jing High Command envisioned them acting.