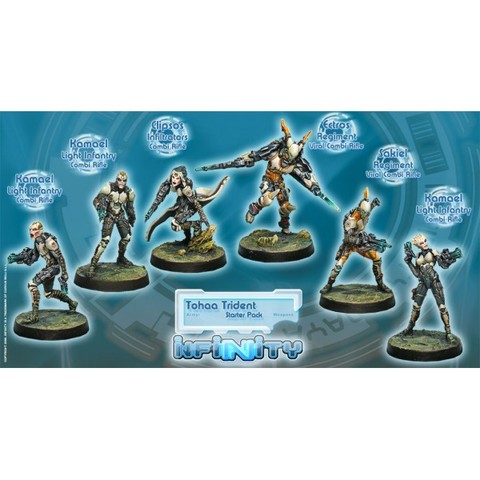 Vaarso Battlespeak Notation: Since first days of the Colonial Force, the Tohaa army created after Unification and forerunner of the modern Tohaa Trident, the hundreds have been used to identify the basic military corps. Nowadays, the hundreds are the numeric denominator for the vertebral corps, those making up the core of each of the three spikes or branches of the Tohaa Trident. For Tohaa numerologists, the number 110 symbolizes glory through very painful conditions and great personal sacrifice.

After the initial military disasters in the Wars against the Fenrig Imperative, there was only time to apply the reforms of the New Model Army to one integral military body, the Kamael Light Infantry, or the 110. The New Model Army's success was evident: Facing the Fenrig, Kamael Infantry obtained victories while the rest of the basic infantry corps were reduced to ashes. At the end of the Wars against the Fenrig Imperative, the Kamael Light Infantry had become the main infantry corps for the Tohaa Trident, absorbing the remnants of the other infantry types.

Profile: Kamael Light infantry comprises the main combat corps of the Tohaa Trident and is the fundamental support for any combat action, from massive clashes to limited operations. Currently, Light Infantry regiments are the biggest and most numerous units in the Tohaa military forces. Spread across the entire Tohaa Trinomial territory, they are present on every frontline against the EI's Combined Army. Constant conflict against such a powerful adversary has sharpened the skills of these regiments, hardening them in the heat of battle. However, it is selflessness which distinguishes the glorious Kamael Light Infantry, always carrying the weight of action without respite. There is no more steady or determined stride than that of the troops that advance, day after day, to liberate their people from tyranny and to open the gates of the future for their entire race.

Vaarso Battlespeak Notation: Given the relevance of number 3 in the Tohaa culture, all numbers that are multiples of 3 are reserved for designating prestigious multipurpose units, those notable for their mobile and adaptative qualities. The number 36, or Sakiel, refers to endeavor and stubbornness in the face of an enemy or a particular type of opposition.

Profile: There are two main requisites to be part of the Sakiel regiment. The first is to possess combat experience with a good record of frontline actions. The second is to have suffered a personal tragedy. All Sakiel are native to the Colonial Systems, all coming from Tohaa worlds that have fallen under the Evolved Intelligence's domain. They have all seen their cities and their loved ones burn. They are all uprooted soldiers without a home to return to, without families with which to reunite. However, they all share a personal objective: Vengeance. Their sole purpose is to make EI pay for the atrocities it and its associated races have committed. A cold hate is nestled within the hearts of the Sakiel which erases any other emotion they might feel. None of them will fail in their commitment and not one will renounce their mission; the Sakiel are willing to make the ultimate sacrifices to strike back at their greatest enemy without hesitation, doubt, or mercy.

Vaarso Battlespeak Notation: Ectros is the name given in Tohaa language to "e Number". The e mathematical constant (e ≈ 2,718...) is Calculus's number par excellence as well as one of the most important numbers in mathematics. In Neebab Numerology, number e refers to absolute success in actions of great magnitude and importance.

The Ectros Regiment was the first Tohaa Heavy Infantry unit adapted to the concepts of the New Model Army, absorbing the tactical lessons learned in the initial clashes against the relentless Fenrig. In this way, the Ectros Regiment became the main spearhead of Tohaa forces in the second phase of the War against the Fenrig Imperative, developing a crucial role in the victory against the expansionist enemy.

Profile: The Ectros Regiment can boast an excellent combat record, with a length few line units in this arm of the galaxy can equal, as it has participated in all conflicts that its race has suffered through in recent history. The Regiment is the oldest Heavy Infantry unit still active in the Tohaa Trident, acting as the structural axis of the Infantry corps and the core of the heavy assault forces. The Ectros are known as the "foundations of the attack divisions", and when talking about their exploits it is always acknowledged that they continually fight in the hot spots of greatest responsibility. The Regiment was the architect of the most awesome victories in the Tohaa Wars against the Fenrig Imperative, and is a veteran unit in the constant conflict against the EI. There is no planet or colony that does not have a commemorative plaque dedicated to this unit, acknowledging its sacrifices. Its members are proud of their their exceptional talent for achieving victory as well as their capacity for survival, openly self-proclaimed as ‘hard-to-kill bastards’. The Ectros are gifted with not only a finely honed tactical instinct but also the personality of the Holdaan hornbeast, king predator of planet Runohaa, from which they have adopted its characteristic horns and poison. On any battlefront where an impressive resistance has been conducted, and in any battle where victory has been stolen from EI's claws, there will be an Ectros Regiment survivor, shamelessly grinning while directing obscene gestures towards the dying enemy.

Vaarso Battlespeak Notation: Clipsos is the name given to the "Null Set" (Ø) in the Tohaa language. As a symbol, Clipsos denotes absence but also potentiality, which is why it has become the denominator of the Tohaa invisible troops, those capable of anything.

Profile: Clipsos Infiltrators make up the Executive Action, infiltration and deep surveillance unit of the Tohaa army. Because of this, inside the structure of the Tohaa Trident they are under the operational control of the Exploration and Intelligence branch, the Tohaa equivalent of a Military Intelligence service. The primary mission of this invisible unit is to compile vital information about an enemy and its resources as well as carrying out missions involving the elimination of people and strategic objectives, and performing black operations and unregistered actions. The Clipsos are undetectable executioners able to escape through the gaps in an enemy’s lines.

Clipsos Infiltrators have a very strict recruitment process, as not many Tohaa can fulfill the minimum requirements to be a part of this unit. Their members cannot be married or belong to any Triad, be it civil or military, and the selection process emphasizes psychological evaluation, constantly testing their temperament. Only loners and strong individualists, uncommon in Tohaa society, are capable of enduring extended missions in hostile territory, isolated, without provisions or contact with allied forces. However, the essential elements to becoming one of these invisible operatives are a steady hand and the lack of empathy so characteristic of a long range killer.