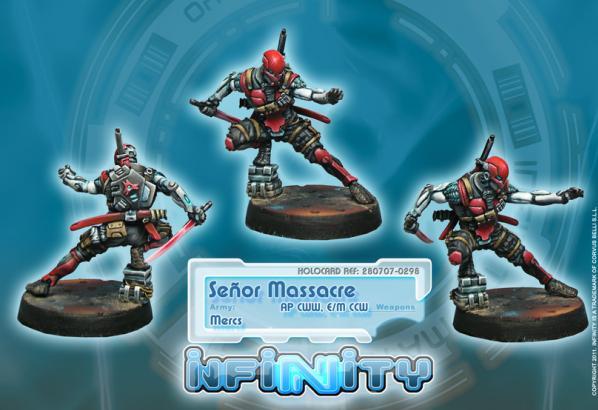 “Stand there on the floor and blood, pendejo. You are no more than a mere punching bag to me. I am Señor Massacre and this fight ends right now” Señor Massacre to his adversary just before his 23rd victory. Corregidor, illegal fight circuit.

There is a clandestine street fight circuit in Corregidor. It is totally illegal, of course, so the vatos and tsotsis (Gang members from Latin and African origins, respectively) who participate in it use masks and an alias to hide their identities. The nom de guerre and the mask serve to create a character and a reputation in this underground culture.

Señor Massacre had a bright career. He was an agile and intuitive fighter, and for quite some time, he was a sure bet. But the fame and drugs made him lose part of his intuition and he made some bets his skills could not cover. Hounded by debts and thugs, he joined the Nomad Military Force and asked for assignment to the frontline where he learned new things and recovered his combat intuition. During the NeoColonial Wars, he was the only commando who survived the boarding and destruction of the Sun Jiao cruiser. As a result, his face was permanently marked by radiation and military assault viruses: a massive abrasion of the skin that cannot be healed, even by the most avant-garde regeneration treatments of Bakunin.

Licensed by the Nomad Military Force, he recovered his former identity as Señor Massacre and became a private contractor. It was known that he was the leader of a corsair boarding group in Human Edge, that he worked for the Los Puños Rojos guerrillas in Central America jungles, that he acted as saboteur for the eco-terrorist group Eco-Aktion, and that he was the bodyguard of a drug lord from Tien Shan. For some time he returned to the clandestine fight circuit, but then he rose to the major league, in the Aristeia! Underground, where he stood out for his verbosity and spectacular fighting, and for the cruelty and lack of mercy shown by the spec-ops veteran.

Some people say Señor Massacre is no more than a facade and his behavior is not so much aggressive as it is self-destructive – revealing a man that hates himself and tries to hide behind a festive mask and overpowering attitude. But pop psychology is of no interest to those who contract him, and even less to the victims of his deadly abilities.