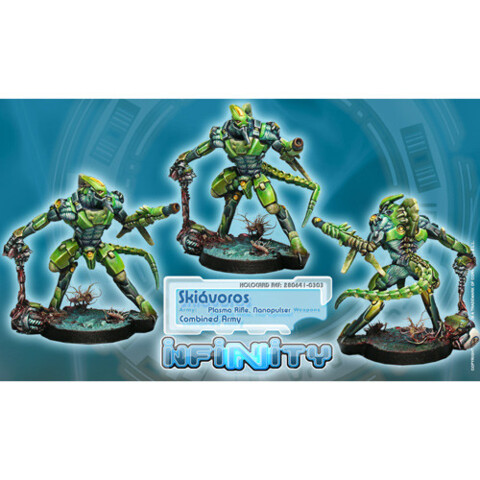 The Skiavoros are the original model from which the other EI special combat forces were later created, as well as being one more of its sinister discoveries wrenched out of astral space. Originally they were known as The Colonizers, and so they appear in the Annals of the T'zechi Digesters. They were created millennia ago by a race now forgotten and buried among the stars. This civilization was aware of the fact that if they really wanted to cross the void of space and reach the stars, they had to leave their bodies behind and overcome the limitations of their own biology. Following this philosophy, The Colonizers became the key point of their space exploration program. They were the zenith of genetic engineering, a new race specifically designed to explore the stars. Their bodies were developed as resistant mobile casings, able to host computer personality models - copies of their creators - granting the physical and quantronic continuity of the individual. Optimized completely for survival, they were gifted with physical resistance and an extraordinarily long life span to confront extended periods of stellar exploration. Their metabolic, breathing, and digestive systems were adaptable and modifiable so that they could inhabit any possible environmental condition. Their mission was to travel around the galaxy colonizing other worlds, whilst facing any possible threat. They were so perfect, yet so strange and different to their makers, that they feared their own creation. So the Colonizers were released in ark-ships, but only after it was ensured they would never be able to return. As a preventative measure, their creators erased all cartographic registers from the ship's navigation files about their planet and home system. This was an outward journey only.

Thousands of years later, the EI intercepted an ark-ship that wandered through the cold darkness of space. Time had wreaked havoc with the expedition. Without knowing where to go or where to return to, The Colonizers had put their bodies in stasis. Although more than half of them were still physically viable, their computer models had degraded after eons without activation. The EI took control of these mindless bodies as the spearhead of its colonization forces. After loading them with weapons and downloading Aspects of itself into them, it launched them to conquer new civilizations, renaming them Skiavoros, 'Shadow Devourers' in Classical Greek, destroyers of the darkness created by the lack of an EI government.

Miniatures are supplied unpainted. Preparation and assembly may be required.