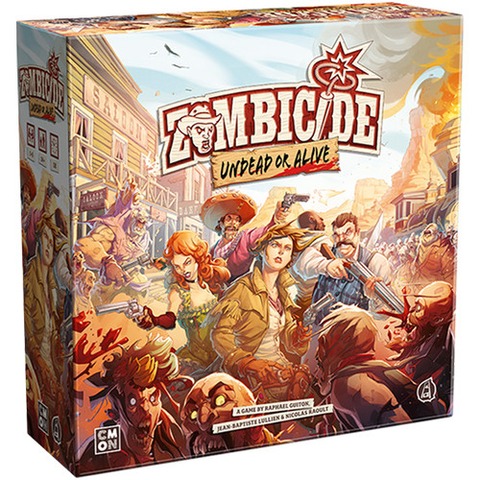 The zombies came from nowhere and destroyed the world we used to know. A few brave people united and took up arms against the infected horde. These survivors roam the country, looking for supplies, payback, and fun at the zombies' expense.

Your are Survivors. The past is gone. Choose your fate! Now is the time for challenge, danger, freedom, and friendship.

Play as a team with your friends as survivors of a zombie invasion in the Old West, with an action twist! Zombies are played by the game itself, using simple rules and a deck of cards. Find weapons, kill zombies, and build up your Survivor's adrenaline to unlock their true potential. The more zombies you kill, the more of them are coming!

Undead or Alive plays with rules from Zombicide, with dedicated features including Survivor class abilities (Brawler, Faithful, Gunsliger, or Townsfolk), new Zombie spawn rules, a Gatling Gun, and even a train, among others! Pick from the 14 Survivors to build yoru posse and bring justice to your frontier town through 10 missions made using the modular map tiles.

Miniatures are supplied unpainted and pre-assembled.