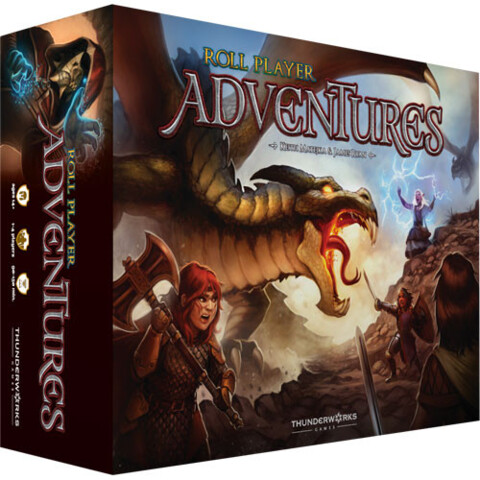 After a thousand years of peace, Dragul armies raided from the north, prompting you and every other loyal citizen of Nalos to sign up as soldiers of the King's Guard. The armies of Nalos fought long and hard against the North's monstrous generals and their minions, finally stemming the tide of the Dragul invasion.

But new threats have arisen that jeopardize all of Ulos. A mysterious cult prepares for the return of an ancient god. The long-abandoned gate at Brizoor Waal, a portal between planes, rumbles with new life. Strange rifts appear in the sky, unleashing bizarre creatures into your world. Dragul invaders seek to exploit this instability to conquer Nalos.

Roll Player Adventures is a cooperative storytelling board game for 1-4 players, set in the world of Ulos. The players portray a party of characters who will face challenges and make decisions that affect the unfolding story. Adventures does not require the Roll Player base game or any of its expansions to play. Pick from one of six pre-generated characters, or import a favorite Roll Player character and take them on a heroic journey. If you do import a character you've built in Roll Player, any number of expansions and any number of promo cards/boards that were used may continue to be used in Roll Player Adventures.