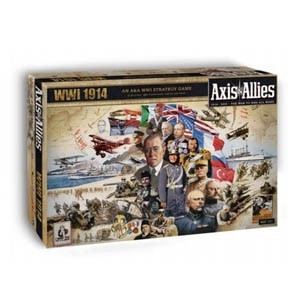 For the first time ever players can experience Axis & Allies in the setting of World War I. The familiar, time-tested A&A rules have been adapted to let players control the armies of 1914. Pick up this title to enjoy a classic favorite in a whole new way!

WWI 1914 gives players command of the mighty armies of eight major powers. The Central Powers of Germany, the Austro-Hungarian Empire, and the Ottoman Empire are aligned against the great alliance of France, the British Empire, the Russian Empire, Italy and the United States on a new game board extending from Washington, DC to Bombay, India. 22 all-new unit sculpts are included, and enfranchised players will be pleased to see WWI units, like biplanes, in Axis & Allies for the first time.